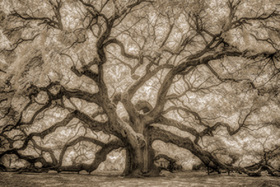 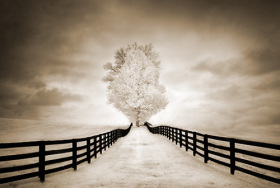 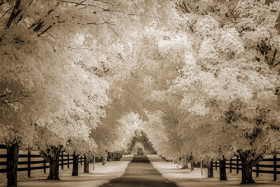 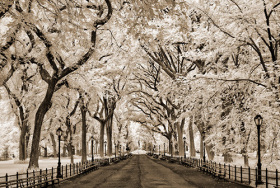 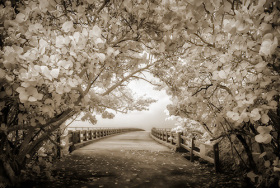 The leaves and tassels of the oak

Were golden-green with May,

In another poem, she describes seeing ‘the whole wide world’ in a single tree. “In The Oak” describes a sacred place of radiant light and joyous song. Is it any wonder that we felt her poem in our hearts the first time we saw the Angel Oak of Charleston?

The Mormon prophet, Lehi, dreamt of a path with a sturdy rail leading to a radiant tree. This wondrous Tree of Life represented salvation, and by holding fast to the rail of faith one could avoid the pits of temptation and despair. When Russell’s mother would tell him this story, the tree represented the deepest dreams of his heart, and by holding
fast to the rails he would surely reach the Tree of Life, his very reason for being. Although Lark has been gone for many years, this pastoral scene in Kentucky immediately reminded Russell of his mother and her belief in the power of dreams and perseverance.

This piece is a companion to Lehi’s Dream. Just as Lehi’s Dream reminds Russell of his mother, this piece reminds him of his father. Arthur was a columnist who covered horse racing. Shortly after he passed away, we found ourselves at a legendary horse farm. The surroundings reminded Angela of ‘Come Forth,’ a poem she had read in which a man dreams of the father he recently lost. In the poem, the dreamer
describes his father as a ‘knower of horses;’ and just before the dream ends, the father speaks words of comfort to his son. The dreamer awakes feeling at peace - and standing beneath the maples, reading the poem, we  felt peace, too.

This elegant pathway of elms and historic cast- iron lampposts has been a gathering place since the mid 1800s. Once considered ‘an open air hall of reception,’ in its early days, visitors would have seen stately carriages and
pedestrians in their Sunday best socializing and enjoying the Luxury of leisure time. Today, visitors from every walk of life cherish this sanctuary of green space; and strolling beneath
the canopy of elms remains a timeless,
enchanting experience that is quintessentially New York.

A bridge of silver wings stretches from
the dead ashes of an unforgiving nightmare
to the jeweled vision of a life started anew.
This ethereal image takes its title from the writings of Aberjhani, a poet who has thoughtfully explored how people manage the transition from imminent personal destruction to almost unimaginable personal victory. We love that this image seems to evoke a similar feeling. If we press on toward the unknown, beneath the arch of angel wings, just beyond the rise of the bridge we will  find our greatest joys. 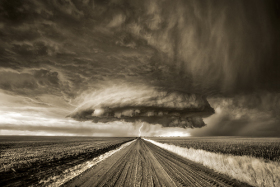 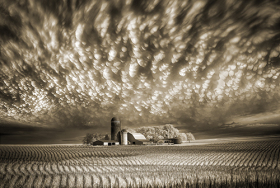 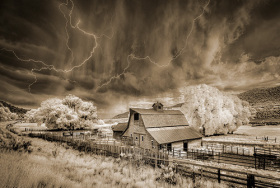 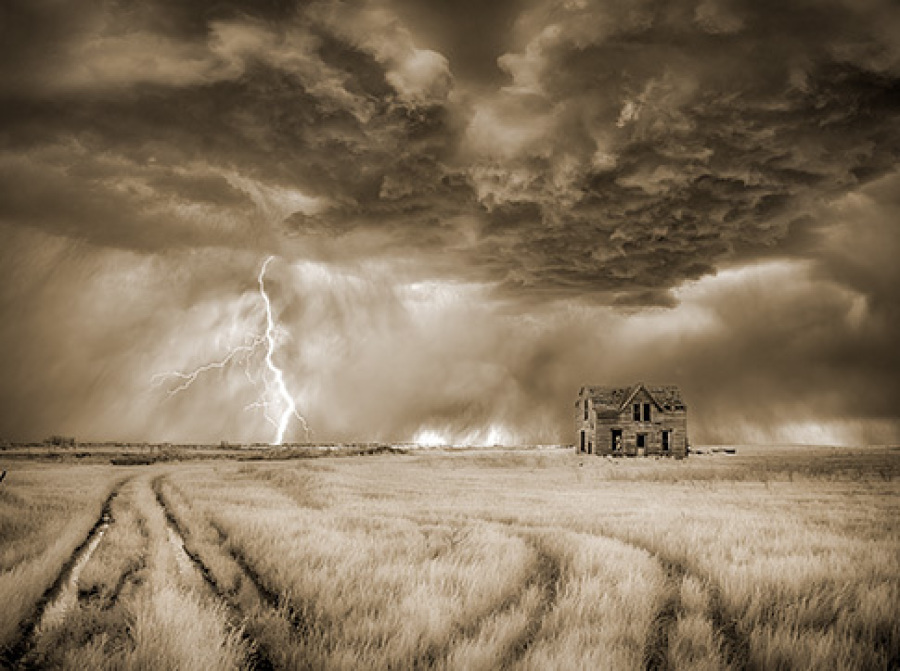 There are some things that you learn best in calm, and some in storm.   ~ Willa Cather

This once-in-a- lifetime shot is dazzling without any explanation but it also resonates with us for personal reasons. Russell’s mother, Lark. was both the daughter and the mother of artists; and she loved Cather’s ‘The Song of the Lark.’ It beautifully illustrated many of the lessons she learned from her father and taught to her son. Most importantly: while an artist must commit to patient study to master his craft, he will ultimately be measured not by what he creates in the calm of practice, but by what he captures when the storm howls. The moment captured in this image was the literal embodiement of this truth.

You must not blame me if I do talk to the clouds. ~ Henry Thoreau

This intensely textural sky captivates people. For weather fanatics, mammatus clouds are special because they form in sinking air - whereas clouds usually form in rising air. Yet, most people are understandably drawn to the roiling drama that hangs over an otherwise
serene pastoral setting. While they often feel an impending doom, these clouds are actually called Messenger Clouds because they signal that the worst has past. Standing below these surreal skies, it wouldn’t have surprised us to hear voices speaking or angels singing.

Sometimes you chase the storm, and
sometimes the storm chases you! As much as Russell enjoys a good storm chase, it still threw us for a loop when we found ourselves stuck by the side of the road somewhere on the Colorado /Utah border with a flat tire. As we waited (and waited and waited) for roadside assistance, a magnificent thunderstorm rolled in and lightning crackled all around us. Yet, while the day had taken what we thought was a horrible turn, it end up being fantastically memorable. There is great beauty in a storm, and we savored every minute of it while we hunkered down by the +/4 Ranch to watch it.

In mythology, before there was anything, there was a primeval emptiness. The elements - earth, air, water and fire - churned in restless turmoil. From this dark void the first gods appeared and the world emeged. Not long ago, we found ourselves in a place that felt like that. A place that was utterly nowhere. Around us, the wind howled, lightning flashed and rain pounded the ground. The nothingness crackled with power and energy and it would not have surprised us at all if gods appeared and new universes were born before our very eyes. 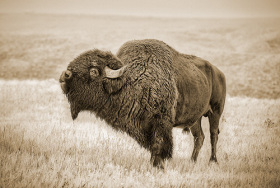 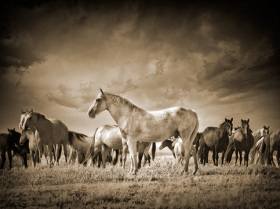 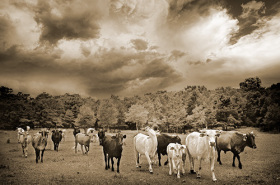 In 1851, Russell’s 16 year old great grandfather, James Harwood, sailed to America from England alone. Soon after, he joined an expedition heading west to settle the Lehi Valley in Utah. As we travel similar roads, we often
think about his brave overland journey. This was especially true when we spent time photographing buffalo. In the presence of these beasts, we could almost imagine what young James felt when he saw herds of buffalo for the
first time. This bull, in particular, gave us chills with his fierce stance and mighty roar. It’s no wonder the bison has become the symbol of the
western pioneer.

The purist of protectors, this noble stallion placed himself between us and his herd as we approached their hill. He remained still - quietly watchful - and only after he determined that we were not a threat did he step aside to let us meet his band of wild mustangs. That moment of acknowledgement and acceptance by a creature of such

dignified strength held tremendous
significance for us. His guardianship of the herd embodied the courage of the people in our lives we admire most - those who stand resolutely to protect others. This image is our tribute to them.

Years ago, we came upon this happy heard. We worked fast to get a few shots and left hoping we had captured something special but - because we were working with film - we had no
way of knowing if it was a hit or a miss. Then, in the darkroom, we realized we had indeed captured something special. We had caught an instant that passed too quickly for our eyes to really see, and it gave us the exilerating jolt that
makes us fall in love with film over and over again. ‘Coming Home’ doesn’t just describe the laughing queen of this herd as she leads her gals in for the night - it also describes the way we feel every time we step in the darkroom.

Russell’s father was a writer who covered horse racing for more than 30 years. It’s no wonder, then, that Russell still finds himself drawn to the horse farms of Kentucky. So one misty, overcast day we set out from Lexington and came across these two gentle souls. As we wandered and watched, they stayed close to one another nickering and nuzzling from time to time. Then
the stars aligned to give us this once-in-a-lifetime image. We were in the right place with camera ready when they brought their heads together in this sweet, heart-like pose. For one
incredible moment, the world was just us and these magical Bluegrass Beauties. 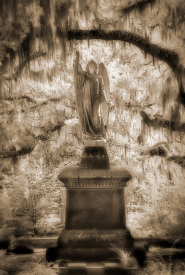 This gentle angel watches over Savannah’s Bonaventure Cemetery; and among the many stories that start (or end) here, one of Angela’s favorites comes from “Midnight In The Garden
Of Good And Evil.” Near this angel is the grave of poet Conrad Aiken. Toward the end of his life, Aiken spent much of his time here, sipping gin and tonics and watching the river. One day, a ship with an interesting name caught his eye.
He checked the shipping news to find out where the intriguing vessel was bound and found this: “Cosmos Mariner, Destination Unknown.” Haunted by the phrase, he had it inscribed on the stone bench that serves as his tombstone.